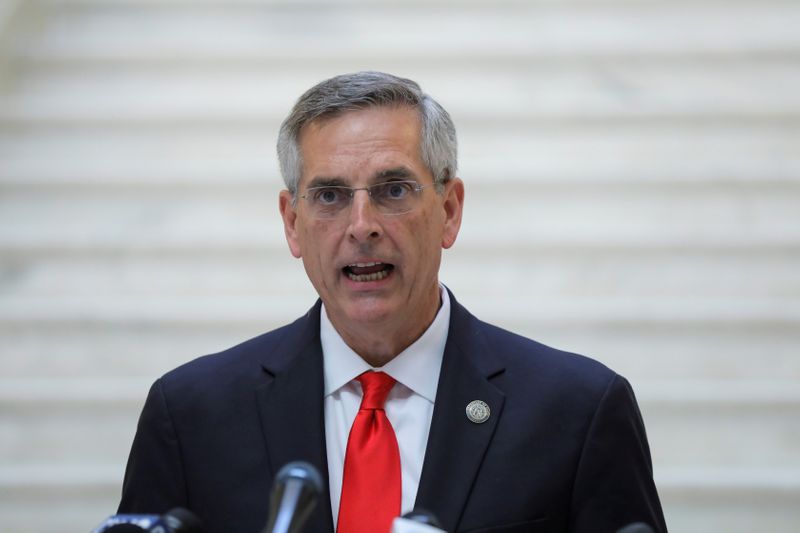 © Reuters. FILE PHOTO: Georgia Secretary of State Brad Raffensperger gives an update on the state of the election and ballot count during a news conference at the State Capitol in Atlanta, Georgia

WASHINGTON (Reuters) – A Georgia prosecutor plans to examine a phone call between U.S. Senator Lindsey Graham (NYSE:) and Georgia’s secretary of state as part of a criminal investigation into whether former President Donald Trump or his allies broke state law in trying to influence the results of the election, the Washington Post reported on Friday.

Fulton County District Attorney Fani Willis will look into the call Graham made to Georgia Secretary of State Brad Raffensperger 10 days after the Nov. 3 election, the Post reported, citing an unnamed person familiar with the probe.

Graham, a Republican and a close Trump ally, asked Raffensperger whether he had the power to toss out all mail ballots in certain counties, Raffensperger has told the Post.

Raffensperger said Graham appeared to be asking him to improperly find a way to set aside legally cast ballots, according to the newspaper.

A spokesman for Graham, Kevin Bishop, called the accusation “ridiculous.” He said Graham was asking Raffensperger how the signature verification process worked and the senator never asked him to disqualify a ballot by anyone.

Bishop said Graham has not been notified of any probe of the call.

The Fulton County District Attorney’s Office and Raffensperger’s office did not immediately respond to requests for comment from Reuters.

Willis is investigating Trump after a Jan. 2 phone call he made pressuring Raffensperger to overturn the state’s election results based on unfounded voter fraud claims.

In the call with Raffensperger, which was recorded, Trump says: “All I want to do is this: I just want to find 11,780 votes, which is one more than we have,” referring to the narrow margin of President Joe Biden’s victory in the state, one of a handful of swing states that cost Trump the White House.